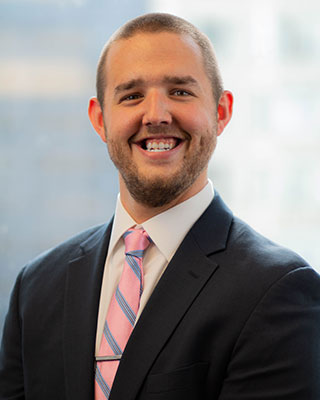 Chris O'Shea joined the Sherwood Law Group as an associate attorney in 2020. Chris devotes his entire practice at the Sherwood Law Group to fighting for clients who have sustained personal injuries, including cases involving automobile and truck collisions, uninsured and underinsured arbitration claims, pedestrian cases, slip and fall injuries, construction accidents, and premises liability. Chris takes extreme pride in his ability to dig deeper for clients to help them receive the compensation and justice that they deserve. Since 2018, Chris has worked tirelessly to provide the best representation for his clients by planning a long-term trial strategy with each case, so that if it the case does not settle, a foundation will already be in place that will ultimately lead to a favorable verdict for his client. Chris believes that if you prepare a case for trial from inception they have an even better chance at resolution. His detailed trial strategy and approach has made Chris one of the top up and coming trial attorneys in Illinois.

Chris graduated from the University of Illinois, Urbana-Champaign in 2015. He enrolled at DePaul University College of Law that fall. In law school, he served as the Executive Editor for DePaul's Journal of Sports Law. While in law school, Chris worked at a commercial litigation creditors rights law firm, as well as at a prominent personal injury firm as both a law clerk, and later as an attorney. Chris earned a Juris Doctor from DePaul University College of Law in May of 2018, and was admitted to the Illinois State Bar in November of 2018. He is also licensed to practice in the U.S. District Court for the Northern District of Illinois.

Recent Verdicts/Settlements:To contact Chris O'Shea for a free consultation or to discuss representation, please email him at cmo@sherwoodlawgroup.com or call 312-627-1650.